I have a 2005 R1200RT.&nbsp; &nbsp; I don't mind the servo brakes, and I like the double horn.&nbsp; You can actually hear it just fine.&nbsp; I came to this bike in 2008 from an 2003 LT.&nbsp; I purchased it from a dealer after trading in my LT due to leaking seals.&nbsp; During my 3 years with the LT I had almost every motor/transmission seal leak at one time or the other (except final drive).&nbsp; All service (except the one that killed the clutch from oil leakage) was covered under extended warranty.&nbsp; The LT had approximately 34,000 miles on it when I traded it for the RT.


I have loved my RT and have approx. 60,000 miles on it now.&nbsp; It has been almost trouble free.&nbsp; I have performed the majority of the maintenance on it at home with a friends help.&nbsp; I don't plan on trading anytime soon.
Top

I have owned all of them except the twin-cam.

My BMW twin experiences began with an R80/7 with an RS fairing. It had a high ratio bevel box and did it go on an open road...back in 1983. Subsequent twin riding included an R100gs (how I wish I'd still got that one!), and an r65LS, when I fell on harder times! Used an R80RT on my initial police bike course.....which was not very inspiring, especially when it threw a gear selector issue and has to ride 40 miles in second to the lunch stop somewhere in Norfolk! Subsequent courses and many operational miles done on a Norton Rotary! Not much better frankly!

I returned to bike ownership buying a 2014 Yamaha Fazer8 was told would be good for touring 2 up !! My partner thought differently sliding forward on the seat under braking. 3 weeks after buying said bike went back to dealer to query if it needed a service, first thing I saw was a 2007 R1200RT just in, salesman cornered asked if we could do a deal !!! Returned home picked up other half who's first reaction was no no no, returned to dealer rode half a mile up road. Tap on my shoulder go back and do the deal !!! My first BM that now the clutch has been replaced, I thought it a bit heavy on the ride back home, now smooth as silk by comparison. Turned out had been sat for 2 years having only done just over 400 miles the last year just 59 miles causing the pins to rust, in the clutch.
This is my first BM and I must say am staggered by the level of service I have received so far, for an 8 year old bike to find BMW main dealer who I did not buy the bike from will free of charge sort out 3 previous recalls that have not been done by previous owner.
Top

Sounds like a win/win/win situation.
You win got a great bike
Dealer wins get you in the door again on their good customer service.
You missus wins won't get blisters from sliding up and down the seat under breaking and high velocity take off.

Well I'm new to the bmw family, bought my 2015 rt 1200 a month ago & loving it, 2nd bike owned & my first was a Suzuki boulevard m90 cruiser, I'm only short so struggling a bit with forward stance to the bars compared to the cruiser but a set of ilium bar risers will fix this problem,other then that it is an absolute pleasure to ride , couldn't be happier&nbsp; 8)
Top

Glad your enjoying your `new toy ' Fish, and welcome to the Forum...... 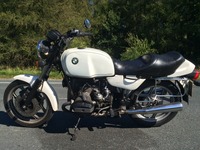 Just got to hope he never needs to brake in anger because they don't.
Top

RTman10 wrote: Just got to hope he never needs to brake in anger because they don't.


Yep had one of those and hit a car that turned in front of me. Brakes were on, but not enough to stop me from 30&nbsp; 8)
Top

Where has the fairing gone?
Top

I once owned a 78 R65.&nbsp; The only compatible bits I can see is the rocker box and Bing carbs.&nbsp; Must be a bits bike. Can't see it ever being an RT.
Top

Way back in the '70s I rode R60 R75 and then the first of the R80 with an Avon fairing which felt as if it was miles in front of the bike and didn't handle at speed. Then came the R80RTP a good all round bike at that time I bought my first BMW and R100S which I loved out on the open road though it was not as smooth around town as the R80. Then came 3 K100's two of which were RT and one naked, they were nice bikes. After a break for kids came an 1100 Pan followed by a 1300 Pan, I had no idea how tame and soft they were till I tried a demo K1200GT, that thing flew, had to have one, three clutches later I lost faith in them and bought a 1200GS twin cam, a fabulous bike, I thought I needed that for the Morocco trip, not knowing that A most of the roads are as good as ours, some better and B that no bike can do soft sand in the desert for more than about a yard. I was smitten with the idea of a 6 cylinder motorbike so then had a GTLE, wonderful bike especially the engine but, for me too heavy. Now I have a 2016 RT LE and I love it. so much lighter than the 1600 that you don't notice the lower power. I'm 65 now but I met a chap in Spain last year who was 85 and had the same bike, so there's hope.&nbsp;
Top
Post Reply
54 posts